How to Make Passion and Networking Less Painful

How to Make Passion and Networking Less Painful 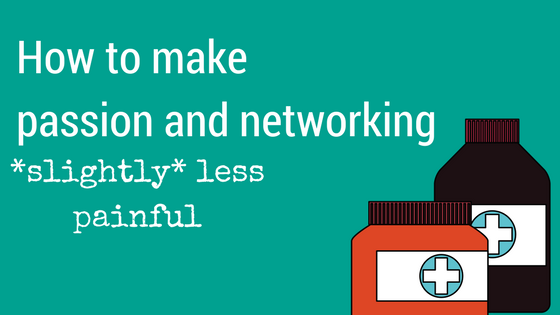 How are you doing with your career progress?

Are you feeling awesome and organized?

Or, are you – like me – sometimes a little frazzled and wondering why this year is going so fast?

I was thinking about careers when dealing with the grocery store the other day, and I had a helpful epiphany.

See – the grocery store is my nemesis.

I forget stuff (even when I have a list), I get confused (where is the marshmellow fluff??) and mostly, I find it a drag. I’m not a foodie :).

But, for a time I was the main shopper in my household, because I work from home and enjoy having food in the house – even if I don’t like cooking it.

But after being grumpy about it with my now-husband, I decided that instead of going to the store, I was going to order all my groceries online. It would be a failsafe, I reasoned to myself, because I could see what I had in the house and make a list in the online cart at the same time!

So, I tried that. But I often randomly got other people’s groceries by mistake, and I still managed to forget to order necessary stuff. Did I mention I’m an incompetent grocery shopper?

So, my system wasn’t working. And I didn’t like it so I wasn’t doing it often. And my husband didn’t like it, because he didn’t want other people’s random groceries.

So then he stepped in and offered to shop. But, he wanted me to provide all lists and food ideas, he thought he’d just go to the store for me (he is also not a foodie and would happily eat fast-food for almost every meal on his own).

I sent him haphazard lists (I would randomly think of something and send him a text, so he’d get texts that said “hey, how are you?” and then “beans!”).

It stressed him out.

So we were both grumpy. I was all “you can make lists too! You have EYES!” and he was all “Can’t you think this through at ONE TIME using SOME SEMBLANCE OF ORDER??”

And then we hit on an idea.

He would make an outline for me of different food groups in the order he would like to get them (and fill in items he thought we needed) and send it to me, and I would fill in the remaining items I *thought* we needed.  Then he’d shop.

It worked. And it’s funny, because what was missing this whole time was not more skills at shopping, instead it was a system that worked for us.

So let’s talk about YOUR career. Maybe you hate networking, or you are stuck and don’t know how to find your passion.

So you spin your wheels.

And I get that. But maybe the problem isn’t that you hate networking, it’s that you haven’t found a system or structure to make networking work for you.

Or that you DO have a passion, but you haven’t figured out a good system to help you find it.

So think on it – what are some small changes in HOW you do things, that can help you achieve your career goals? How can you turn your career nemesis into something that actually works for you?

It’s okay if it takes some trial and effort (see my sad grocery store story), but small changes in your routine and approach can yield big results.

So stop telling yourself “I can’t do this” or “this won’t work” and try saying “What small change can I make to make this easier on myself?”

Then go and DO IT.

Need some help with putting that structure into place? No problem!

If you want immediate help in finding your passion (on the cheap), click here.

If you want VIP service and an amazingly supportive personal career coach in your pocket to show you the way, then simply click here.

We’ve got you covered!

The Four Best Podcasts For Your Career