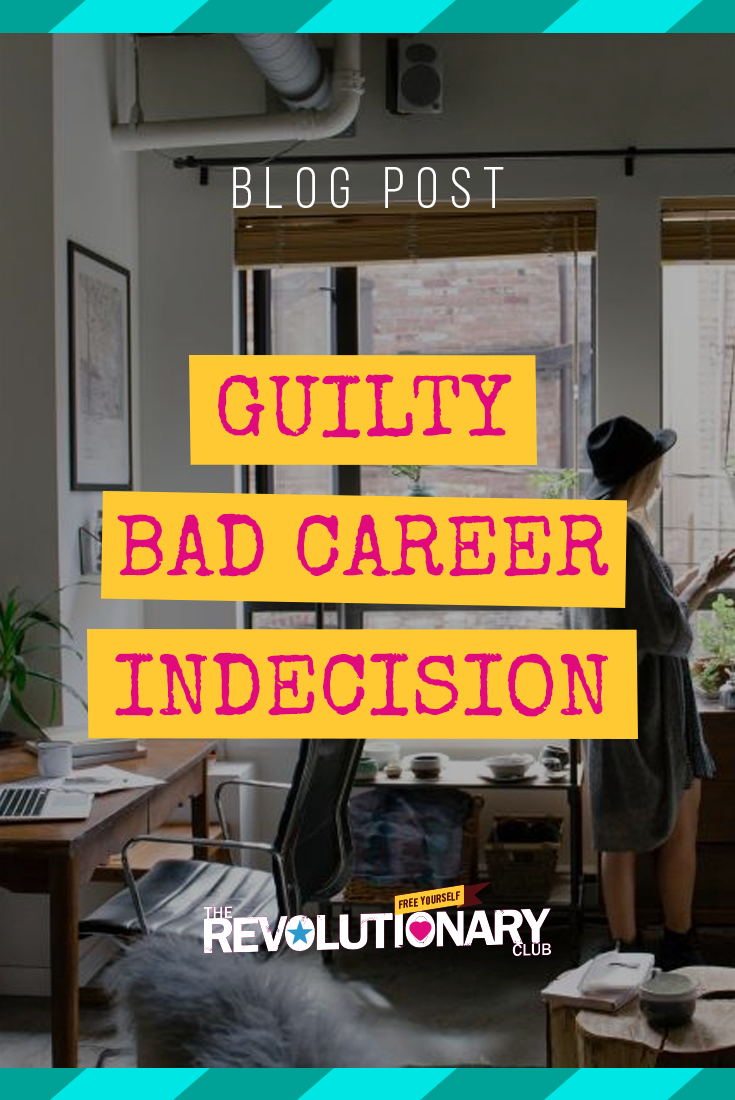 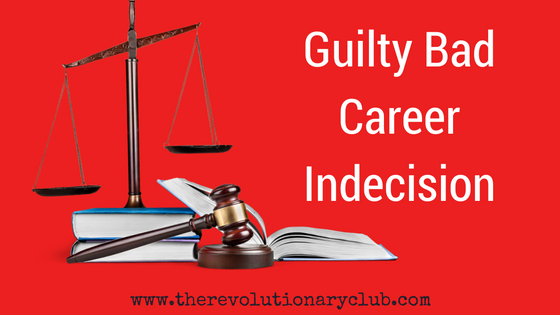 Have you ever felt indecisive about your career?

Maybe you’ve been feeling guilty for wanting something new or challenging. But what?

Or maybe you’ve been feeling stressed about how much you hate your job (but indecisive about your next step).

And frankly, it sucks. Because you aren’t making a decision, you feel guilty – why aren’t you making progress? And because you feel guilty, you get weighed down…and procrastinate even further.

Which leads us to a circle of …. not awesome.

So, let’s talk for a second…because you have ideas and you deserve to NOT be dragged down by guilty indecisiveness.

I think that the problem that most of us have is pretty simple: We start to get confused about what we really REALLY want.

So, for example: When I was stressed in my old consulting job I got all shifty and full of guilty indecisiveness. I was on a short circuit that kept repeating itself.  First I’d say something like: “I need a NEW CAREER” in some sort of dramatic fashion.

Then I’d be all “No seriously. THIS IS THE TIME IT’S REAL PEOPLE.”

And then I’d panic with the old “How will I pay my bills?” Followed by “What would I EVEN DO that is different from this??!!” And then I’d end up with “I’ll just DIE IN THIS JOB OBVIOUSLY I SHOULD GIVE UP NOW.”

What I wish I had done instead was:

It’s hard to know what is right for you when you don’t even know what you want.

Maybe it’s feeling like you are making an impact (in which case, what does THAT look like? Break it down even further).

Keep that list handy and add to it as you get more ideas (don’t panic, in other words!).  Things will come to you.

Don’t think about your parents, your spouse, your kids, your friends.

For a few minutes, just think about YOU.

This may be a novel experience for some of you in this community, or it may just be long overdue.

But honestly, it’s kind of fun.

So go ahead – have some fun.

Okay, now you have an idea of what you want – but what’s next, right?

So, you might have a LOT going on this year in your life, and while you really want to get another job, you just had a baby, your parents need extra care, your spouse lost their job, or a million other things.

So your #1 priority might be to not rock the boat any further for the next year. But, your top priorities over the next 20 years are to have work you love and time with your family – neither of which your current job allows.

That means that while you can put off the idea that you might quit your job this year, you know you need to set aside some time to think about your next steps.  You let go of the guilty indecision of being stuck, and instead embrace the idea of starting to make a long term plan to research work that has more of what you actually want.

Or you may be in a place of readiness. You are READY to go after this passion thing. It’s your #1 goal for this year (and for the next 20 years).

So, you start figuring out what you want to do (here’s some help if you aren’t sure – it’s an easy free workbook), and you take that list of wants and begin to career search hard. It’s your number 1 goal, and you’ve finally got a direction (list of wants) to help you get started.

You’ll decide you are on the right career path when you meet up with a career that hits your passion and your wants – no more wondering if things are a good fit anymore and staying stuck – you’ve got some guidelines that will finally help.

So now you have your list of wants, and an idea of what your big priorities are right now.  These two things will help keep you from ending up stuck in guilty indecision.

But there’s more – and it’s a method that is both oddly simple and obnoxious.

The method? Trusting yourself.

Sometimes it’s hard to trust yourself in your career because any decision is a huge one.

But, I know there have been times in your life when you have made an odd or different or unusual decision, and it felt right.

Think about those times.

For me, I once made the decision to go to graduate school in Brussels.

I’d never been to Belgium before, and it was a new graduate program to boot.

But I’ve never felt more right about it.

Was it a crazy move? Absolutely.

Was it one of my best life decisions to date? Yes.

It was so weird – because I was stressed about what to do, and yet when I thought about going to Brussels I felt calm.

And so I went.

So take your list of wants, and your list of priorities, and try and trust yourself.  Recapture that feeling of “this is a good decision” so when you feel it again, you’ll listen.

Will every career decision come easy? No.

But they will come easier.

Feeling pretty stuck and want help figuring out what to do next so you make progress? Grab the amazing and free job UNstuck kit right over here.

It’s three days of magic to help you move forward (in less than 10 minutes).

The 3 LinkedIn Mistakes That Make Your Eyes Bleed