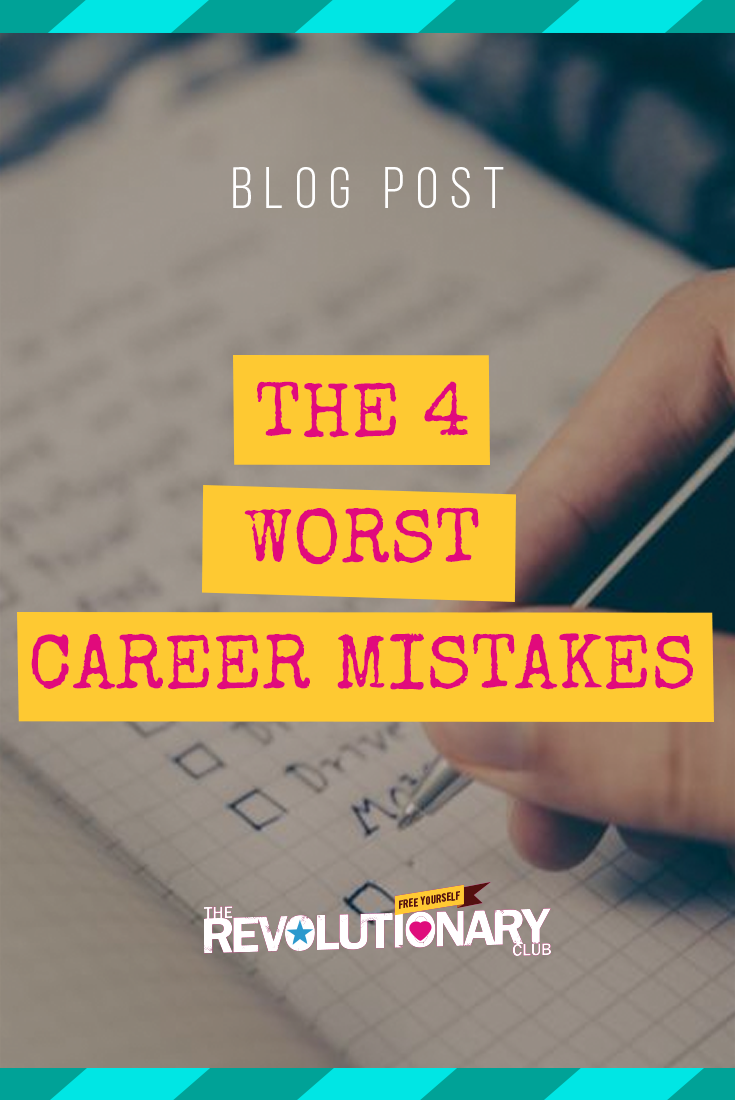 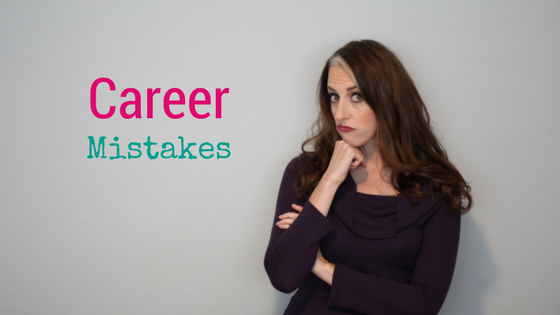 Careers are dicey things, aren’t they?

I mean, first off, they are your source of survival. So of course it’s stressful if you contemplate a change or think about stepping off the beaten path.

Then, for many of us, they are also a key foundation of our self-worth. It’s where we derive confidence, satisfaction, and a big chunk of fulfillment.

Or, it’s where we feel beaten down, mediocre, trapped, or just plan tapped out.

Long story short, it’s easy to overthink, be overanxious, or just do nothing (so as not to rock the boat).

But let’s talk about that for second – because your work is something you will likely do for the next 20, 30, or even 50 years.

And I don’t want you to make big career mistakes.

So, here are the biggest mistakes to avoid:

Career mistake #1: Getting complacent in skills

Most companies offer some sort of on-boarding and then training.

Many offer a lot of different training options.

But for most of us, we join a new company, take that initial training, and then totally fail to keep our skills sharp, beyond what’s needed in the day-to-day job.

Not only because it can be a recipe for boredom, but it’s also hurtful to your long-term career prospects.

Let me give you an example:

John joins a company, shows up every day, and does great work.

He gets in a routine, and doesn’t make any effort to invest in his skills beyond what’s required on the current job.

When times comes for promotion – he’s passed over. While he does great work, he hasn’t made any additional effort to learn the skills for the next level, and his company isn’t impressed. He loses out on a fancy-new title, AND a bigger paycheck.

Over time, this loss mounts up. James realizes he’s bored in his current job, but he doesn’t have the resume to go after anything different…so he feels stuck.

Here’s a different story: Casey joins an organization and does a good job. She takes all of the required training, and her work is considered stellar. In addition, Casey signs herself up for additional training at least once a year – choosing different (but relevant) topics.

She has a goal to get promoted, so she pays attention to the kind of skills her boss (and her boss’s boss) have. Plus, she doesn’t want to get pigeonholed or stuck in a rut.

So, first she takes a training on leadership in the workplace.

Then she takes one on Microsoft project (she sees that is an important skill in her organization at the higher level).

Then she attends a conference on communication.

Then she brushes up on her excel skills via a free internal online company course and gets a certification.

Spread over the course of 3 years, her time and overall money investment is small.

But it’s about to pay off…

When the time comes to get promoted, Casey’s in a great spot! Her fellow co-workers who are also up for the job, while excellent, have just been doing the day-to-day job and haven’t take on any additional responsibilities or learning. Casey is different: Not only does she have all the skills and qualifications needed, her company is impressed by the additional investment she’s made in her career. Too bad for them that she’s also been contacted by a few people she met at the conference on communication, who are trying to poach her for an even better job. Now she gets to choose her next step.

Bottom line: By investing in her skills, she created multiple new career opportunities for herself.

So here’s a question: What new skill are you investing in this year?

Career Mistake #2: Getting complacent about money

James got hired a good company. He enjoys the work, and time passes.

He’s been there for 5 years.

Then…the company is acquired and his job is on the line.

They say that they want to keep him, even offering a more senior role….but no additional income.

He finally gets out in the job market (for the first time in years)  and gets another job offer…for 60% more than he’s currently making.

Let me say that again – this job offer is for 60% more than he is currently making (true story!).

While that is awesome (go James!). But it’s also sad.

So, put another way – James has lost money over the years.

He never did any research on his market. He never asked around his network, hopped on GlassDoor or Payscale, or even just read some job listings to see what current salary ranges were being published.

Before you get in a huff – I’m not saying that James could have asked for a raise and got it (though he definitely should have tried), but I am saying that he let himself get 100% out of touch with what the market was paying, and it was to his detriment.

Companies like to pay you based on what you used to make at your last job. If you start low, it’s often hard to ask for and explain why you need an enormous raise in salary, which leaves you constantly behind.

And you lose a LOT of money.

Being in touch with the market allows for you to either 1) Ask for a raise at your current job (assuming you are doing great work and deserve it) or 2) Start to think about leaving for something that’s going to pay you what you are worth.

A good rule of thumb? Once a year chat with your colleagues, get online, and check out what you should be getting paid and make sure that you aren’t falling too far behind market rate. You don’t have to leave your job, but you do need to know what you are worth.

Want a bonus challenge? Pick someone at your level in your industry and agree to share EVERYTHING with them. Salary, vacation package, benefits package, education allotment, promotions, bonuses. It’s awkward at first, but having real facts about what other organizations pay, from a real live person, is something you CAN put a price on (and it’s a high one!).

Oh HOLY GOD this one is important.

I know it’s easy to pay lip service to networking and never do it, but honestly – that’s one of the biggest mistakes you can ever make.

A friend of mine has recently applied for 80 jobs.

Obviously this drives me insane.

Why? Because the only time she has landed interviews in the past 9 months are when she used her network.

Applying landed her nothing.

But – when she asked around, mentioned she was looking for something specific, then people in her network helped pass her resume or suggested a company to check out.

As much of a pain in the a** as it is, networking is SO CRUCIAL and so efficient in terms of helping you get that next great job.

You never know when you might get laid off.

Or when the thought of going to this same job for another day makes you want to stab yourself in the eye and you just. Can’t.

Having a reasonably active network can save you in both of these situations.

But here’s the thing, warming up your network and building it isn’t that hard.

You don’t need a caste of thousands, you just need 10 or so people willing to help you.

They can be friends, family, former co-workers, friends of friends, alumni connections from college, it doesn’t matter.

So, make an effort to stay in touch with people now – comment on more social media shares, invite people to coffee once a month to chat, send an email saying hello once a year, just make an effort.

Make an effort BEFORE you need it, so that when you do need help – your network is willing to give it (and it doesn’t feel like you are just showing up because you need something).

Need help with that? Here’s an awesome free mini-training on how to build your network in 5 minutes or less. Jump on here.

Mistake #4: Not getting career help when you need it

Many of us are silent sufferers. We are miserable, lost, confused, or just zinging around alone in our work.

One of the most powerful things you can do in your career is to have solid support behind you.

Sure, part of this support is your bigger network.

But it’s also objective friends, family, or other people in your life who have agreed to be your career support.

In the Career Happiness Revolution we have career masterminds. Small groups of 4-5 students who are committed to getting on the phone regularly and talking about career ideas, objectives, and holding each other accountable.

Masterminds like this are priceless – so much wisdom and support is inherent in a group, and they are so easy to form!

All you have to do is round up a couple of people and agree to meet once a month to chat about some of your career goals, share ideas, and push each other to take action. Add in wine or coffee, and you are cooking with gas!

And if you are like: “Umm, I need even more help” then consider working with a career coach, i.e., a professional and completely objective expert.

Your career is worth hundreds of thousands of dollars – millions for many – so it’s worth investing in getting the right support when you need it so you are happy at work.

You should have a safe space where you can talk about ideas, brainstorm approaches, get advice or feedback, and not get judged (or have your career on the line by being honest about what you *actually* want to do).

I think everyone deserves amazing career help – and it’s okay to seek it out.

Just don’t go it alone when you don’t have to!

If you want a simple answer to help you find work you love then please check out Zero to Passion! It’s a tiny investment ($35) into a better future for you and your career, and you can do it without leaving your couch!! Yay!

All the details are right here...click.

Struggling? Here's How to Make Magic Happen In Your Career